25 Years of hope, love, and family

What were you doing in 1994? Some of us were enjoying the explosion of Seattle-inspired coffee houses, wearing flannel and figuring out our place in the world. Honestly, many of […] 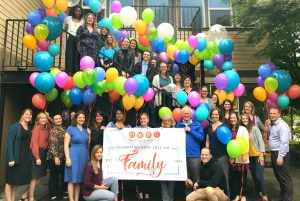 Some of us were enjoying the explosion of Seattle-inspired coffee houses, wearing flannel and figuring out our place in the world. Honestly, many of us are still doing these exact same things in 2019. But something besides fragrant coffee was brewing in the early 1990s, and it was an idea that has now helped grow over 1,000 NWSC families.

A history that began with adoptions

In the 1990s, gestational surrogacy was still a new way to build a family. At the time, John Chally had been practicing adoption law for 15 years. He co-founded Open Adoption and Family Services in 1985, which is now the largest domestic adoption agency in the Pacific Northwest. In 1988, Sandy Hodgson joined the law firm.  In addition to practicing adoption law, she also represented gestational carriers and intended parents in surrogacy and parentage matters, as well as egg and sperm donation contracts.

Clients soon began asking for non-legal assistance with surrogacy, so John and Sandy founded Northwest Surrogacy Center, LLC in 1994 in Portland, Oregon. They saw surrogacy as a loving way to help families grow and to work with the generous women who wanted to be surrogates. Sandy and John were the original – and only! – employees for over a decade. Molly O’Shea joined the team in the mid-2000s and still works there, and they have nearly 40 employees to assist with the many aspects of the surrogacy process.

With the increased success of in vitro fertilization and the reduction in the availability of adoptions, gestational surrogacy gained traction in Oregon and Sandy quickly became a trusted and experienced expert in the world of assisted reproduction and all things surrogacy.

NWSC celebrates its 25th anniversary in 2019. With offices in Seattle, San Francisco and Portland, NWSC has been, and continues to be, integral in the dramatic changes of US surrogacy.

In the coming months, we are exploring various aspects of surrogacy and its growth over the past quarter decade, including:

2.      How have social changes, including gay marriage, celebrity surrogacy, and social media impacted the industry?

6.      The move toward single-embryo transfers and away from twin pregnancies.

We are honored and humbled by the thousands of people who had reached out to us, whether as surrogate or intended families, these past 25 years. We are excited to dive into these stories and to share more about the lives impacted by surrogacy.

Thank you for being one of the souls to join us on this journey!

« Utilizing their surrogacy experiences in their new jobs

Reporters love to ask me what all surrogates have in common. My answer surprises them. »