Blog #13: Trying to not be gross on embryo transfer day

I feel like I’m watching a movie. Is this really happening? Months of meetings, contracts, medications and tests had all led up to this point – it was embryo transfer […] 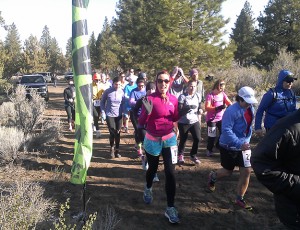 Running my final race before the embryo transfer and pregnancy.

I feel like I’m watching a movie. Is this really happening?

Months of meetings, contracts, medications and tests had all led up to this point – it was embryo transfer day! Upon arriving at the fertility clinic, I’d donned a surgical gown and cap, taken the required Valium to relax my uterus and had spent an hour resting as the transfer time approached. I dozed off as the Valium and warm atmosphere kicked in, only to be awoken by my grumpy bladder. A full bladder was required for the transfer and it was begging to be relieved.

Just then, the coordinator brought in her iPad. My intended parents, Johan and Anders, were connected with us from Stockholm. I had not seen their faces since our initial meeting. Hi guys! Here we go!

The coordinator explained to the three of us what to expect today. As planned, one embryo would be transferred. Their embryos had been genetically tested and graded on their viability and strength before being frozen a few weeks prior. The clinic had thawed the two rated the strongest, but the highest graded one had not survived, meaning the second strongest would be transferred.

“This one’s a fighter! I have a great feeling about this,” said Anders from halfway around the world. Modern technology marveled me. Here I was, mere moments away from beginning a pregnancy with a baby I was completely unrelated to, and the dads were able to participate in the whole thing from nearly 5000 miles away. It truly felt sci-fi.

I said goodbye to the guys as I was wheeled into the procedure room, where they verified my name and the name of Johan and Anders three separate times. The procedure room was dark and sterile yet cozily warm and comforting at the same time. The doctor, two nurses and the fertility clinic coordinator surrounded  me.

The clinic staff was quick and efficient. Positioned on my back, my pelvis was elevated and – so far – it felt like an intense annual check-up. Except for my unhappy bladder, I could feel almost nothing as the doctor worked with a variety of tools and instruments, including a tiny camera which broadcast my insides onto the bedside monitor. Oh, hey there uterus!

As they opened my cervix, the pressure increased and I had a terrible realization.

I had not used the restroom in hours, which meant there was a lot of built up pressure inside me.

I would die of embarrassment if I passed gas while the doctor was down there, but also knew I could not clench or tighten my muscles while they were performing the transfer.

Horrifying. This was all I could focus on. I vaguely heard the nurse giving a play-by-play description of the procedure. A tiny scope, about the size of a spaghetti noodle, held both the embryo and the camera which enabled the doctor to make a perfect placement in my uterus.

“Please unclench; I need you to relax your muscles for us to finish,” the doctor told me. Oh Doc, if only you knew! I’m doing it for your sake.

A few more adjustments and then as quickly as they’d begun, they were done. Hard to believe that more than 6 months of preparation culminated in a 3 minute procedure. I was instructed to lie still for the next hour as they rolled me to a private recovery room.

Now was my chance. “I think I’ll nap, so no need to check on me for a while,” I told the nurse. Saying she’d check back in 30 minutes, she closed the curtain and left and I was able to finally obtain the comfort I’d been seeking. Life is good.

An hour later, they woke me up and I was able to chat with the Swedes via Skype again. They were incredibly excited and kept asking if I felt anything. The clinic staff helped me into a wheelchair and rolled me to the parking lot, where Aaron and Tad were in the car. I reclined my seat and we began the long drive home. 48 hours of bedrest for me to help ensure the little embryo could settle in comfortably. My calmness surprised me; I had 100% confidence that the embryo would thrive. Should I be nervous? Is it weird I have no worries about this?

It was one of the most un-romantic ways to get pregnant, but the IVF transfer was complete and it was time to grow and nurture this little one for 9 months. I already could not wait to see the look on Johan and Anders face when they met their baby in October!

« Oregon, the surrogacy state on OPB/NPR

NWSC is committed to helping families achieve their dream of parenthood through surrogacy while also prioritizing everyone’s health and safety. We understand families and surrogates may have waited years to start this process, and we are ready to help you with your journey. Check out our frequently asked questions about surrogacy with NWSC during this unique time.

Are clinics open?
Clinics are closely monitoring local orders and have implemented social distancing procedures. So the process looks a little different than before COVID-19, but medical screenings and embryo transfers are taking place.

Please don’t hesitate to reach out any time, and you can reach us at info@nwsurrogacycenter.com. We hope you are healthy and safe.

Learn more about surrogacy with NWSC during the COVID-19 pandemic.