Ever played “Pin the Embryo in the Uterus” before? Surrogate Baby Showers!

Ever played “Pin the Embryo in the Uterus” before? Yes? Then you’ve attended a surrogate baby shower! As someone who is very involved in the surrogate community, and as a […]

Ever played “Pin the Embryo in the Uterus” before? Yes? Then you’ve attended a surrogate baby shower! 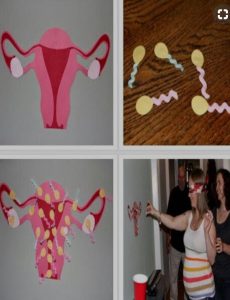 As someone who is very involved in the surrogate community, and as a former surrogate myself, I’m familiar with the excitement that surrounds the birth of a surrobaby. These babies are the most welcomed and anticipated little things ever. But when my fellow surrogates mentioned their surrobaby showers, I was curious to learn more as I’d never been to one. My Pinterest search failed, so I went directly to the source to find out more.

My very unscientific poll (read: Facebook survey) of Northwest Surrogacy Center surrogates revealed a handful of wonderful women who’d had and/or attended showers for their surrobabes. Their stories range from the expected to the hilarious and offered another glimpse into the unique relationship between a surrogate, her intended family, and the rest of the world.

The shower was hosted by the:

» Surrogate Okay, as if being a surrogate isn’t amazing enough (because it is!), some women a baby shower for their intended family (these are the actual parents of the surrobaby). Because many intended families do not live near their surrogate, the logistics of this could be tricky and Skype was relied on more than once. Friends and family of the surrogate typically attended these and celebrated with gifts for the new baby. The gifts were opened and set aside for when the intended parents arrived for the birth. Mellow, fun and low-key, these events highlight the giving heart these surrogates have.

One surrogate also hosted a gender reveal party for her intended parents. But wait, there’s more! After the baby was born, the intended parents had a party for her friends who’d attended the gender reveal event. Her friends met the baby while the dads got to know them better and thanked them for their support throughout the pregnancy. “They even made me sushi since I missed it a ton while I was pregnant,” she said. “Some of my friends brought gifts for baby, or the dads, or both. It was great.”

» Friends of the surrogate — Because pregnancy seriously takes a tribe! These were often small gatherings planned by the surrogate’s friends. Gifts were mainly for her (instead of baby gifts) and included gift certificates for spas, coffee shops, delivery recovery items and post-pregnancy adventures. These events included names like “It’s Not My Baby” Shower and “I’m Just Babysitting for 9 Months” Shower. Games included “Pin the Embryo in the Uterus” (I love this!) and the more typical diaper changing contests and “Guess the Size of the Belly”.

One surrogate shared that she had two separate celebrations and both were thrown by the same set of friends: one was for her and the other was for her intended parents after the baby was born. Talk about an amazing support system. She says, “I appreciated that my friends threw a shower for the guys (intended parents) and the baby. It meant a lot that they valued and respected my choice to do this surrogacy.” I’ve never met her friends but I already love them. If you want to look me up, I live in Bend and would love to have you in my life!

» Friends of the Intended Parents These have a more traditional baby shower feel. Baby gifts are given to the intended family, silly games are played and stories are shared. The surrogate sometimes attended these events and simply played the role of a guest. They didn’t want to overshadow the intended parents or become the focal point of the event. One surrogate told me, “The parents were very sweet and introduced me to everyone individually and made a toast to me, which was awkward but thoughtful. I kept letting them know it was about them, not me, but they wouldn’t hear of it.”

One surrogate, who lives in Colorado, was flown to Seattle to attend a baby shower for her intended family. She attended the event as a guest and loved getting to know the parents better, including their families and friends.

For most intended families, this was their first adventure into parenthood. Their surrogates, all of whom have their own children, truly enjoyed helping them wade through the ‘must haves’ and ‘not needed’ of newborn supplies. One woman helped her intended family create a baby registry online, and she included the registry link in the shower invitation. Surrogates typically live in different towns, states or even countries than their intended families. Keeping this in mind was important when planning the events. Many women were careful to not give gifts that were bulky or awkward to travel with. Others only give gifts that could be used within the baby’s first few weeks, such as diapers, wipes, coffee gift cards or bottles of wine.

Having the chance to truly get to know each other’s closest friends and families was a rare and awesome opportunity for the surrogates and their intended families. This was a universal theme in every woman I spoke with. They came together with a variety of friends and family of both the surrogate and the intended family to celebrate a new baby. They celebrated their different backgrounds, lifestyles, interests, even different countries of origin! But all of this beautifully came together to celebrate the greatest thing in the world — the new little life thanks to surrogacy.

« Talking about my surrogacy and gauging reactions